This page was created for reading and information only, no text, pictures, or information of the original post/article was changed and the link to the relevant articles was quoted below each of the copied articles or text for anybody to visit the relevant webpage (by clicking on the link below)

Slowly, but surely, more and more coaches are opting to run tournaments using non-IJF rules.  Last weekend, I ran the second of my quarterly in-house tournaments using rules that I thought would bring about the best tournament experience for my players.  I was not disappointed.

One scoring change that I made from my previous tournament was to make two yukos equal a waza ari.  This really livened up the pace of the matches since risking an attack is no longer heavily penalized when it fails and is countered for a score.  Because matches are played to their full time limit, there are many chances to overcome mistakes.

On the negative side, some kids were repeatedly overwhelmed and subjected to too many scores.  While we do our best to come up with fair divisions, this is not always possible, especially when we’re not aware of how good new participants may be.  I think a three Ippon spread may warrant stopping a match before it’s officially over.  I’ll have to sleep on it, and confer with other coaches before making a decision. 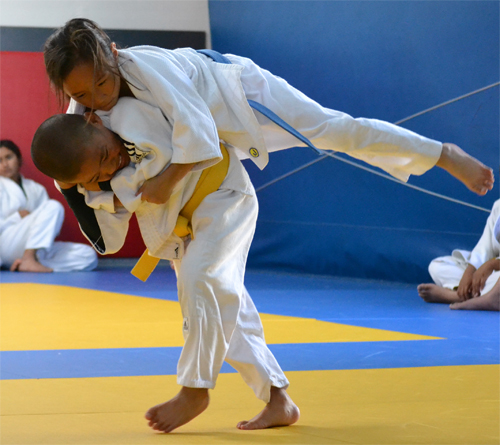 I’m appending an article on Freestyle Judo, which describes pretty accurately the predicament many of us are in when it comes to IJF rules, and what to do about it.  By the way, the author is blind.  He may not be able to see the differences with Freestyle rules, but he sure feels them.

I’m still puzzled why so many coaches continue to participate in tournaments with IJF rules.  I have some ideas why, but that’s for another post.  Enjoy the article.

The last thing Steve Scott wanted to do was reinvent the sport of judo.

Scott, a long-time coach for Welcome Mat Judo in Kansas City, merely hoped to turn back the clock.

“I consider the time from the late 70’s to the very early 90’s to be the golden age of judo,” Scott said. “Back then, the rules were written in such a way that it allowed for a variety of skill.”

The ultimate objective in a judo match is to achieve ippon, or instant victory. Throwing one’s opponent to the ground with force is one way to secure ippon. If the match continues after the athletes are on the ground, choking, arm-locking, and pinning techniques are used to force one’s opponent into submission. This also results in ippon.

In the earlier days of judo, standing and ground fighting were held in fairly equal regard. However, as rules began to change in the mid-90s, priority shifted toward the standing game. Over time, judges started awarding ippon for softer throws, and the time given to athletes for ground fighting dwindled. Referees would stand the competitors back up if a submission wasn’t executed almost immediately.

Scott worried this imbalance would be a detriment to the sport he devoted so much of his life to.

“I really saw that judo was dying, and in many places it is,” Scott said. “Stuff like Brazilian Jujitsu and submission grappling have gained popularity because judo has advocated this position.”

Scott and many of his coaching cohorts wanted to promote a more well-rounded approach. John Saylor, a friend of Scott’s and founder of the Shingitai Jujitsu organization, teamed up with Welcome Mat to host a national tournament in Kansas City in 1998. The competition combined elements of judo, sambo, and jujitsu. Scott received nothing but positive feedback from those who participated, however the tournaments couldn’t continue, mostly due to a lack of financial backing.

Over the next ten years, Welcome Mat athletes continued fighting in all the usual AAU (Amateur Athletic Union) tournaments, but Scott still wasn’t pleased with how judo was progressing. In 2008, he and his fellow coaches began developing a modified set of rules for competition. It came to be known as freestyle judo.

“I wanted to form a set of rules that would allow people to do all aspects of judo that they can possibly do,” Scott said. “also, it was important to make it as objective as possible, so that the referee doesn’t interject himself, which happens a lot in judo.”

Throughout 2008, many local and regional tournaments added freestyle divisions, or Shingitai divisions, as they were sometimes called. Scott and the other coaches tweaked the rules here and there as needed.

In November of 2009 Ken Brink hosted the first AAU Freestyle Nationals in Kearney, MO. Once again, the response was overwhelmingly enthusiastic.

Josh Henges, a black belt who coaches and competes for Welcome Mat, remembers the event well. He brought home the gold in a packed 170-pound senior division.

“It was awesome, man. It was probably the best tournament I’ve ever done,” Henges said. “Not because of how well I did, but it was the most fun. The rules were fun. It really allows for the user’s interpretation of grappling by allowing you to do what you’re best at, whether that’s on the ground or standing.”

The progression of a freestyle bout is similar to that of a more “traditional” match, with a couple major differences. Combatants still start on their feet, trying to break the opponent’s balance and take him or her to the mat. Ippon is still awarded in freestyle, but not as often. It takes an extremely forceful and well-executed throw to secure it. Waza-ari and yuko, the smaller units of scoring in traditional judo, are not recognized in freestyle.

Freestyle incorporates a numerical point system, which is another significant departure from traditional judo. Throws that are determined to be something less than ippon, but are still deemed worthy of a score, result in the official warding four, two or one points, depending on the quality of the throw. Freestyle also allows leg attacks, such as single and double-leg takedowns, ankle picks, and the like. These types of attacks are not allowed in the rules set forth by the International Judo Federation and USA Judo.

Competitors still work their arm-bars and chokes on the ground, and a submission results in ippon. However, athletes are given much more time to ground fight.

Athletes are encouraged to work for the pin as well, which occurs when one combatant holds the opponent on his or her back continuously for 20 seconds. Ippon is awarded for this in traditional judo. In freestyle, however, four points are awarded and the match continues. Freestyle contestants can also score two points for hold downs of 10 seconds, and one for five seconds. When one athlete pins the other, the referee instructs the pinner to work to a submission. If this does not occur within a ten-second window, then the official stops the action, and the competitors return to their feet.

A single point can also be scored by passing the guard, or by sweeping or rolling one’s opponent from the bottom in the guard position.

If a freestyle match fails to produce ippon, then it goes to the scoreboard after the five-minute period is up. If a participant takes an advantage of 12 points or more, the match is stopped and the leading combatant is considered the winner by superior decision.

Henges, who placed fourth in the 2009 Panamerican games, has fought in plenty of more conventional judo events, but he still prefers freestyle.

“I have no desire to do straight judo. It’s just not even fun anymore.” Henges said.

Ironically, most people with experience in freestyle judo say it more closely mirrors Jigoro Kano’s original concept of the sport.

“IJF is a great organization, and they have the best judo athletes in the world, but what they’re doing is not a reflection of what I think Kano wanted,” Henges said. “Freestyle judo is way more like what traditional judo was supposed to be because it emphasizes every aspect of grappling.”

The Freestyle Nationals have continued in 2010 and 2011. More freestyle tournaments are starting to pop up in other places around the country, as well. The first freestyle judo tournament held outside of the United States took place April 10 in South Wales, Australia.

Scott sees a continued potential for growth in the sport. Its inclusive nature brings athletes from various disciplines of combat sport together.

Scott is confident in freestyle judo’s staying power, and doesn’t care what the critics say.

“There are a lot of people in judo who are afraid to rock the boat, and we’ve kind of done that with freestyle,” Scott said. “There’s people out there who say ‘well, that’s not traditional judo’. Well, it is, actually. We’re going back to the real early elements of the hard core ways judo was as a sport.”